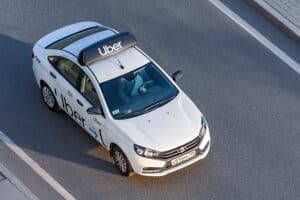 One of the most profound changes to the American economy in the twenty-first century is the evolution of the gig economy. More and more workers are leaving traditional jobs and working for themselves, a trend that will probably increase even more in the wake of COVID-19. One of the largest sectors in the new economy is ridesharing, where independent drivers using their own vehicles are supplementing and even replacing traditional taxicabs.  Ridesharing is a convenient and affordable way to travel, especially in areas which have unreliable taxi service.

However, what happens in the event of an accident involving a rideshare vehicle? Unlike taxis, rideshare vehicles are not owned by the companies, such as Uber and Lyft, that provide the service. Each driver is an independent contractor. Both most prominent rideshare companies, Uber and Lyft, are very careful to characterize their drivers as independent contractors, to avoid potential liability for the drivers’ actions.

Since Uber and Lyft drivers use their own vehicles, their automobile insurance policies should cover any accidents that they cause while carrying passengers. The rideshare companies, in fact, require their drivers to carry insurance and some insurers require a separate insurance policy for drivers who use their vehicles professionally. In any case, if an uber or Lyft driver is responsible for an accident, he or she is responsible for that accident just as if it had happened while using the vehicle for personal errands.

Legislation has recently been introduced in California that would change the relationship between Uber and Lyft and their drivers, making it more of an employer/employee relationship. If this legislation passes, that could mean increased liability for the companies in case of an accident. Both companies have threatened to cease operations in California if the legislation goes into effect.

If an accident is caused by the driver of another vehicle, of course, the driver of that vehicle is responsible for any damages, regardless of whether the injured person was a passenger in a rideshare vehicle.

Injured persons have also made successful claims against rideshare companies when their own negligence contributes to the injury. Some examples include:

If an injured person can prove that the rideshare company knew or should have known that a driver had a criminal history, for example, the company may be found responsible for criminal actions of the driver, such as assaults on passengers and theft of passengers’ belongings.

If you or a loved one is injured in an accident with a rideshare vehicle, you should seek legal advice as soon as possible. At O’Brien & Ford, we dedicate ourselves to helping injured people, and we will discover all possible sources of liability, to make sure you are able to get the compensation you need. Call us at 716-907-7777, or visit our website at https://obrienandford.com/. We offer in-person and virtual appointments, and follow social distancing and all COVID precautions.